The key to a highly productive day is a good night’s rest. However, are you familiar with that one essential element that contributes the most to the quality of your sleep?

That’s right, it all comes down to your bed mattress!

An average individual spends about 8 hours sleeping every night i.e. about 229,961 hours in their lifetime.

With all that snoozing, doesn’t it make a lot of sense to find the most comfortable and reliable sleeping surface to rest on?

Today, most people are actively ditching traditional spring beds and opting for the more advanced memory foam beds instead.

If you have heard about this latest update in mattress trends, but aren’t well-informed about the science behind memory foam and the benefits that come with it, you have come to the right place!

Use our extensive guide to learn all about the history of memory foam and its impact on your sleeping patterns:

Memory foam was first developed in 1966. It was introduced under a contract by NASA’s Ames Research Center in order to increase the safety offered by aircraft cushions.

Initially, memory foam that was temperature-sensitive was commonly known as temper foam and slow spring back foam

The temperature-sensitive memory foam comes with an open-cell solid structure that is created by feeding gas into a polymer matrix.

The solid structure effectively matches the pressure that is put against it. Moreover, it enables the foam to spring back slowly to its original form.

As memory foam got commercialized, its applications expanded to both sports apparatus such as the Canadian / American football helmet liners and medical resources such as X-ray table pads.

NASA released memory foam in the early 1980s to the public domain.

At that time, Fagerdala World Foams was one of the very few brands that were willing to do business with the foam as its manufacturing process was unreliable and difficult.

Released To the Public

They release a product called the Tempur-Pedic Swedish Mattress in 1991.

The success of the product eventually led to the cushion and mattress company, Tempur World.

Later on, memory foam was used in medical and healthcare settings.

For instance, there were cases when patients were required to stay immobile and lie on a firm mattress in their bed for a long period of time.

Memory foam was used in such situations to help decrease events such as excessive pressure impairing blood flow to some of the body regions of the patients and causing gangrene or pressure sores.

While the cost of memory foam was too high initially and hence, it was unsuitable for widespread usage, it eventually became cheaper.

The most common domestic applications of memory foam are pillows, blankets, mattresses and shoes.

It is also used in medical environments such as for hospital bed pillows, padding for individuals suffering from postural problems and long-term pains, and wheelchair seat cushions.

Memory foam is also claimed to be effective in alleviating chronic neck pain and its heat-retaining properties might help decrease pain because of the added warmth.

While the heat-retaining properties are beneficial for some, they can also be considered as a disadvantage when the foam is used in pillows and mattresses.

The third generation of memory foam was then introduced in 2006. Gel memory foam or gel visco consists of visco foam fused with gel particles to speed up spring back time, help the mattress feel softer and reduce trapped body heat.

In 2006, gel-infused memory foam was put on the market.

With the gel contained in beads, this new technology would achieve the desired cooling effect and temperature stabilization by converting from a solid state to liquid within the capsule.

As the physical state of any substance can significantly change the heat absorption properties of any element, the technology was then applied to modern memory foam.

Since gel-infused memory foam was introduced in the market, other materials have been added to the foam to advance it.

Green tea extract, activated charcoal and aloe vera have been combined with the memory foam to provide aromatherapy and reduce unpleasant odors while sleeping.

Rayon effectively wicks away moisture from the sleeper’s body and in result increases their comfort.

How Does Memory Foam Work Exactly?

Memory foam simply becomes soft enough to mold around the natural shape of the sleeper’s body.

This is because the low-resilience, high-density polyurethane form reacts to the heat of your body. When you remove the pressure from the foam, it returns back to its original form.

Initially utilized in aircraft seating, this material has a number of medical and commercial applications. It is used in seating pads for wheelchairs, prosthetics and cushioning for shoes.

However, the most common application is in mattresses and pillows, where the responsiveness and softness of memory foam makes it ideal for a good night’s sleep.

Memory Foam as a Material

The main component used in the manufacturing of memory foam is polyurethane. The polyurethane is made by combining water and hydrocarbons that are commonly found in petroleum.

Then, this polyurethane foam is mixed with additional chemicals to form memory foam.

Manufactures use other blowing agents, complex procedures and compounds additives to form an open cell structure. This makes the memory foam softer.

Other additives such as surfactants and fire retardant chemicals are also added.

The Science behind Memory Foam

Memory foam has a unique feel to it and it supports your body like no other. Following are some of the advantages that memory foam mattresses come with:

They Provide a True Body Fit

The mattresses that are constructed of memory foam mold actively to the natural shape of the sleeper’s body in response to pressure and heat.

They allow your bodyweight to distribute evenly and once you remove the pressure from a memory foam mattress, it returns to its original shape.

This shouldn’t come as a surprise to you that your body temperature can have an impact on how well you sleep.

A temperature-sensitive material is used in the manufacturing of memory foam mattresses that allow them to adjust to your body weight and heat.

As the temperature of your body increases, the memory foam becomes softer and helps provide quality sleep.

If you live in an area with warmer climates, you might want to consider purchasing a memory foam mattress that comes with a cooling feature and offers maximum breathability.

Memory foam is capable of displacing pressure from your body’s pressure points.

The regions of your body that ache have a slightly higher temperature level than the rest of your body.

Memory foam efficiently detects this difference in temperature and adds or reduces pressure to the affected area accordingly.

According to recent studies, a standard mattress contains approximately 100,000 to 10 million dust mites.

However, a memory foam mattress is made of polyurethane foam which is composed of fibers that effectively prevent dust mites that cause allergies.

Unlike conventional mattress materials, the dense composition of memory foam prevents allergens from accumulating over time.

Memory foam mattresses are a logical option for couples as it absorbs any excessive surface movement and reduces the disturbance caused by it.

Therefore these mattresses are an ideal choice for individuals who sleep with partners who toss and turn throughout the night.

Additionally, due to the open cell design of memory foam mattresses, sleepers don’t experience any sagging!

Now that you know all about the science behind memory foam, buying a memory foam product will be an easier decision for you! Memory foam doesn’t only tend to last longer but it also offers top-notch comfort!

Sophie Johnston used to get four-and-a-half hours of sleep every night. That’s because she was a mother of two and had about sixty-five hours on the clock every week, on top of parental obligations. She realized how broken that sleep was, and how important it was to get a good night’s rest. Now she gets a comfortable solid eight hours every night, after painstaking months of research and sourcing all the facts to make it happen. When you have the right amount of sleep and you’re comfortable the whole way through, life gets better. Sophie wants you to experience that.

Download our FREE pdf guide and learn how to take proper care of your mattress. 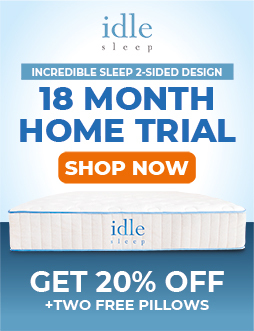